Let’s take a look at the latest subohm tank to come from Eleaf. One of the giants of the industry Eleaf has been around for years now and has the steadily been churning out quality equipment with most being geared towards beginners and intermediate vapers alike. When you’re as big as Eleaf you have the ability to try out new things which is exactly what they’ve done with this latest release, the Rotor tank. I don’t want to give away too much in the intro but from the pics and the name alone you’ve probably already figured it out, so here are my honest thoughts on the Rotor tank from Eleaf.

The kit comes packed in a clear round plastic container with the tank proudly displayed on top and a slip with some basic information about the tank in the bottom. Inside, hidden underneath a sponge insert are the additional contents of the kit. The kit includes the Rotor subohm tank with an HW-T 0.2ohm coil head pre-installed, an extra HW-M 0.15ohm coil head, a user manual and a bag of spare parts which includes a set of extra o-rings. 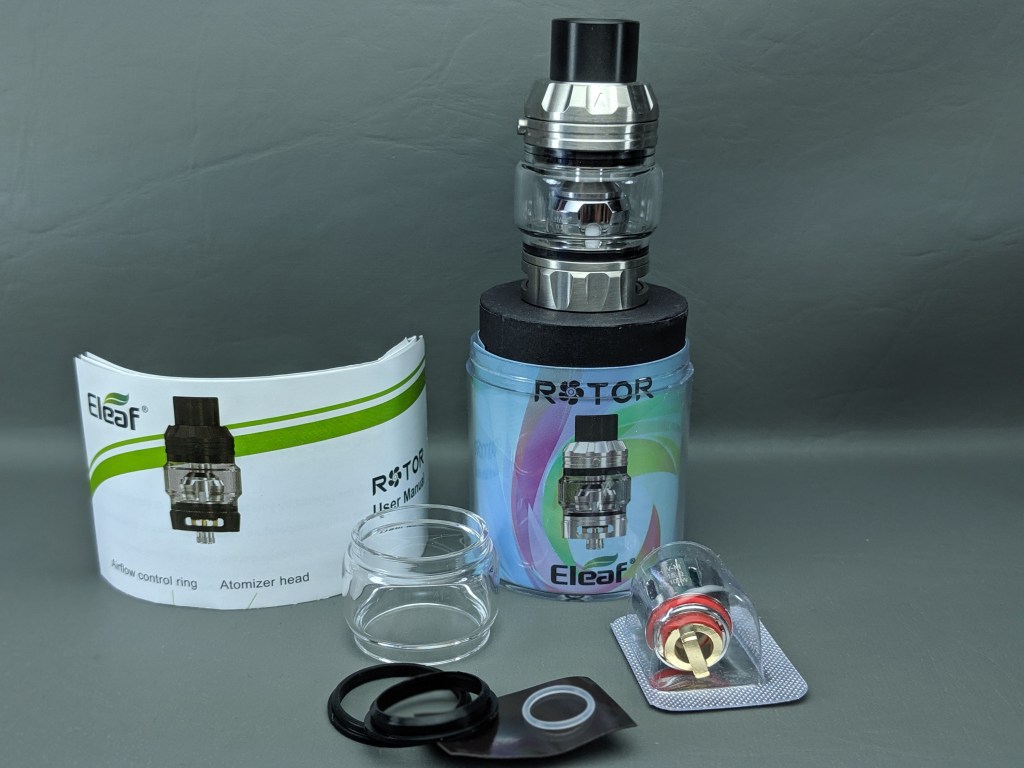 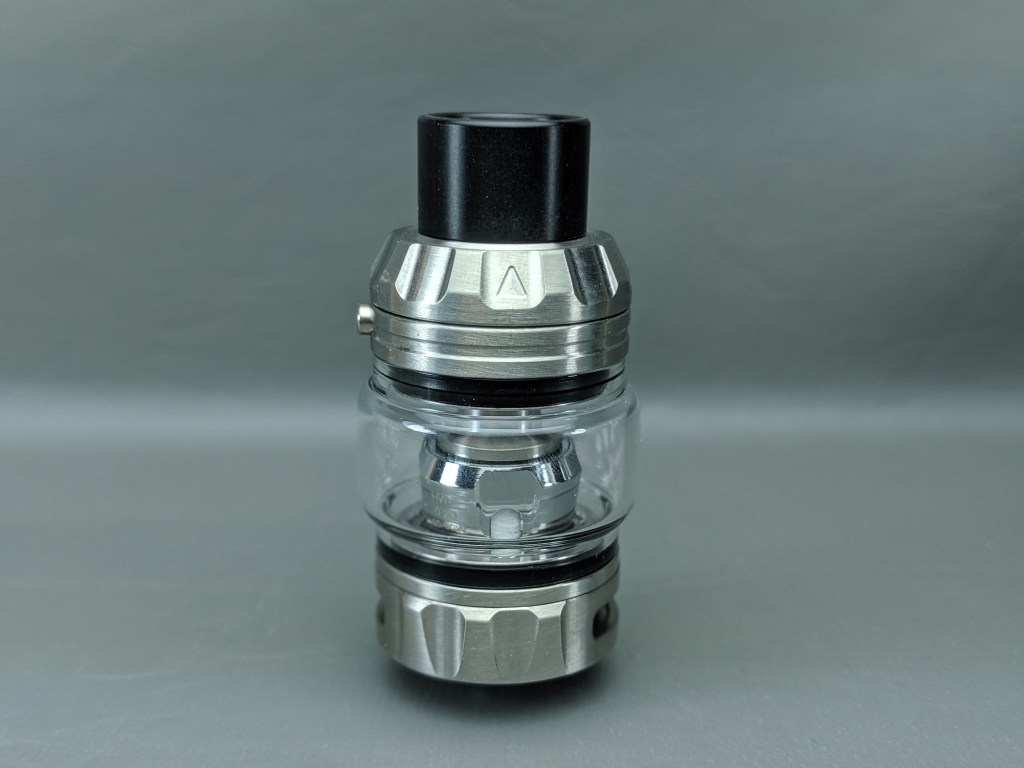 The Rotor tank itself isn’t anything particularly new. It’s a well put together subohm tank with pretty much all of the modern features we’ve come to expect from a sub tank. It stands about 56mm tall with a diameter of 26mm which bulges out to 28mm if you include the glass tank. It’s fairly hefty being made of stainless steel and weighs in at 66g. At the top of the tank it comes equipped with a pretty standard looking delrin 810 drip tip. It’s wide bore and fairly tall but doesn’t look out of place atop the Rotor. Just below the drip tip is the slide to open top fill that has a push button locking system to keep the cap from accidentally opening. Just press the button on the side of the tank and push the top of the tank where the little arrow is and it slides right open revealing the diaphragm style top fill seal. It’s basically a little slit that you push the tip of your bottle into to fill it. I found the chimney housing was a bit big inside the tank leaving little room to push your tip in but it still works and with the diaphragm seal it’s been a mess free experience overall. 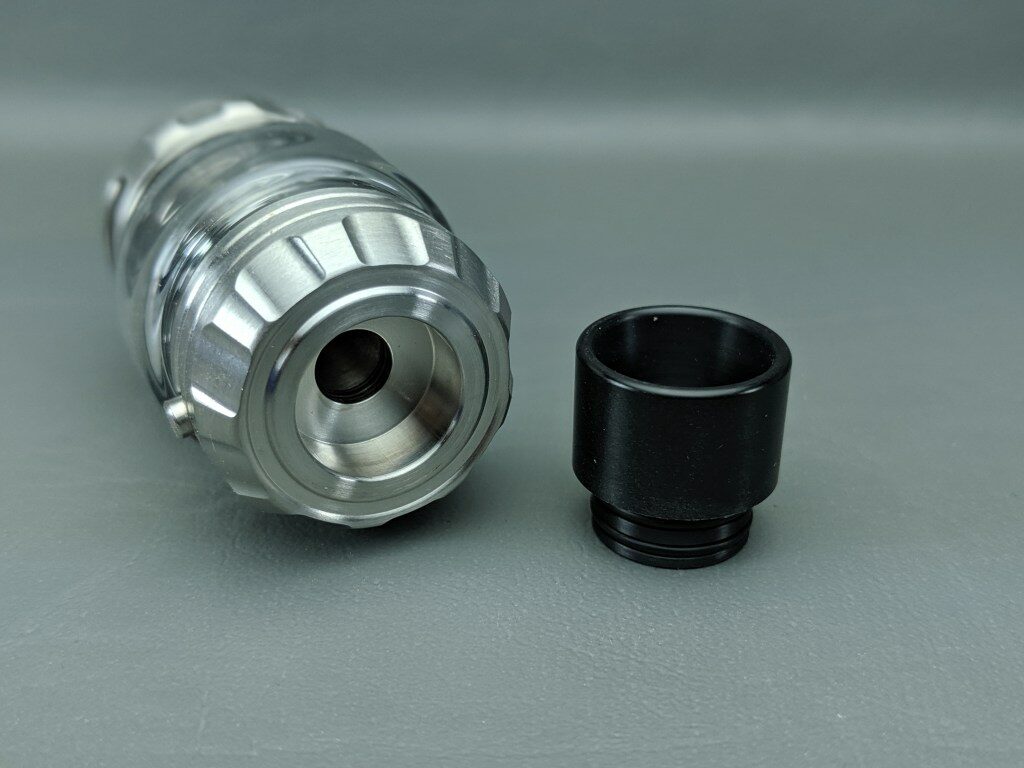 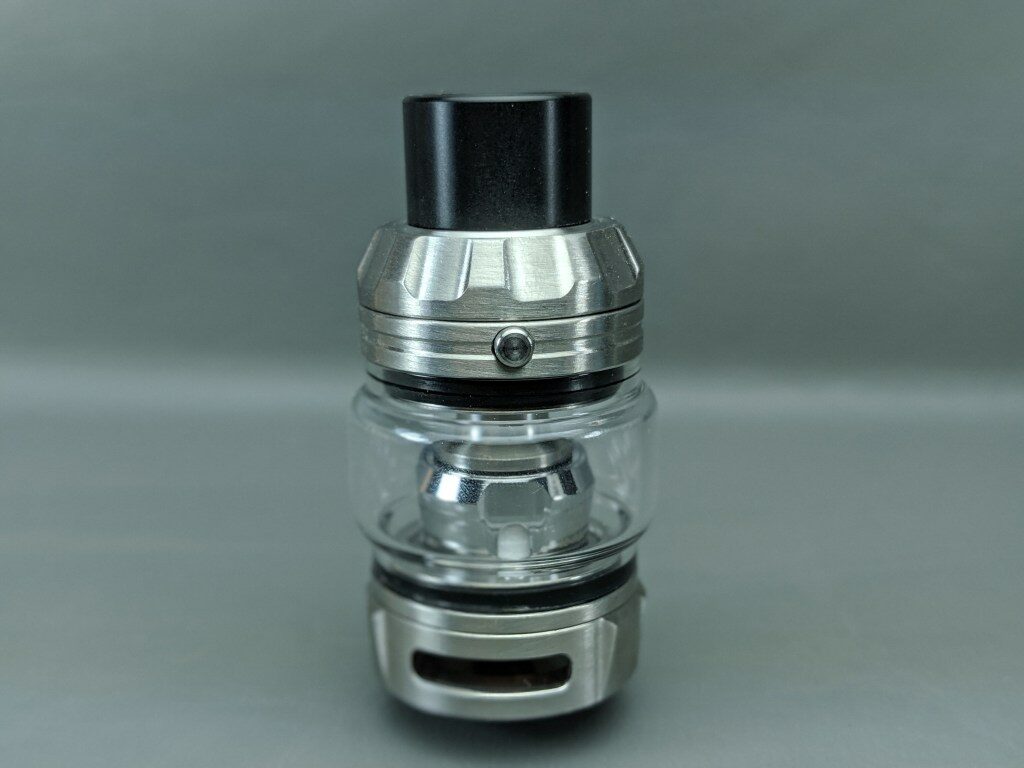 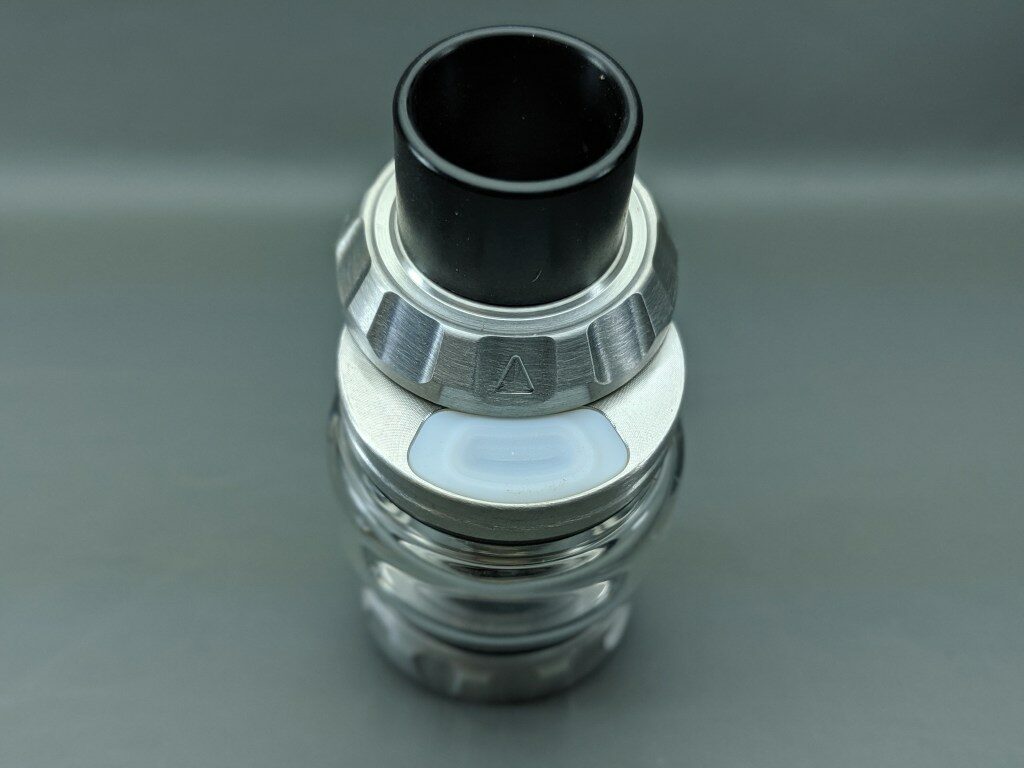 Below the top fill is the bubble glass tank. There are two versions of the tank available, the other being a 2ml TPD version that comes with a straight glass. With the 5ml version you also get a spare bubble glass should anything happen to the one that comes pre-installed. At the base of the tank is the adjustable airflow which is managed by two large cyclops style slots with an outer ring that can be turned to adjust it. The slots are quite wide allowing for plenty of airflow and it’s pretty obvious this thing is meant for direct lung vaping. To access the coil you simply unscrew the bottom section from the tank, unscrew the coil and pop in a new one. You’ll have to empty the tank about half way though before replacing the coil or risk spilling juice everywhere. On the very bottom it’s got some basic branding and a non-adjustable silver plated 510 pin. It’s a simple yet mature design for a tank that works well but the real innovation with this kit comes with one of the included coils. 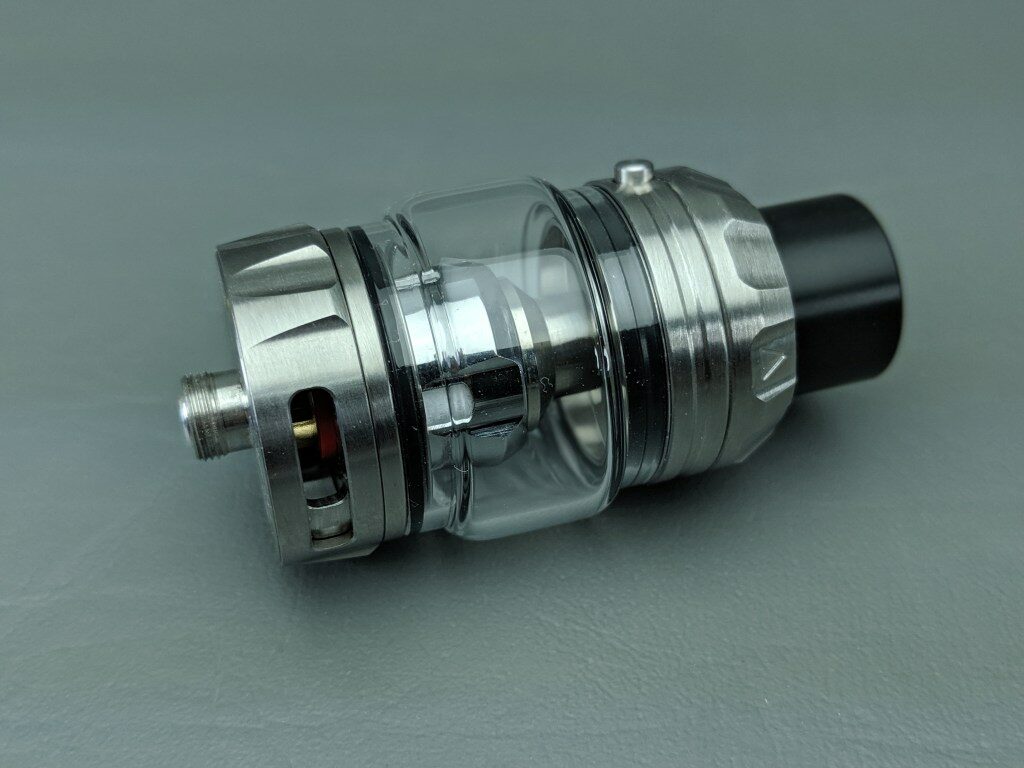 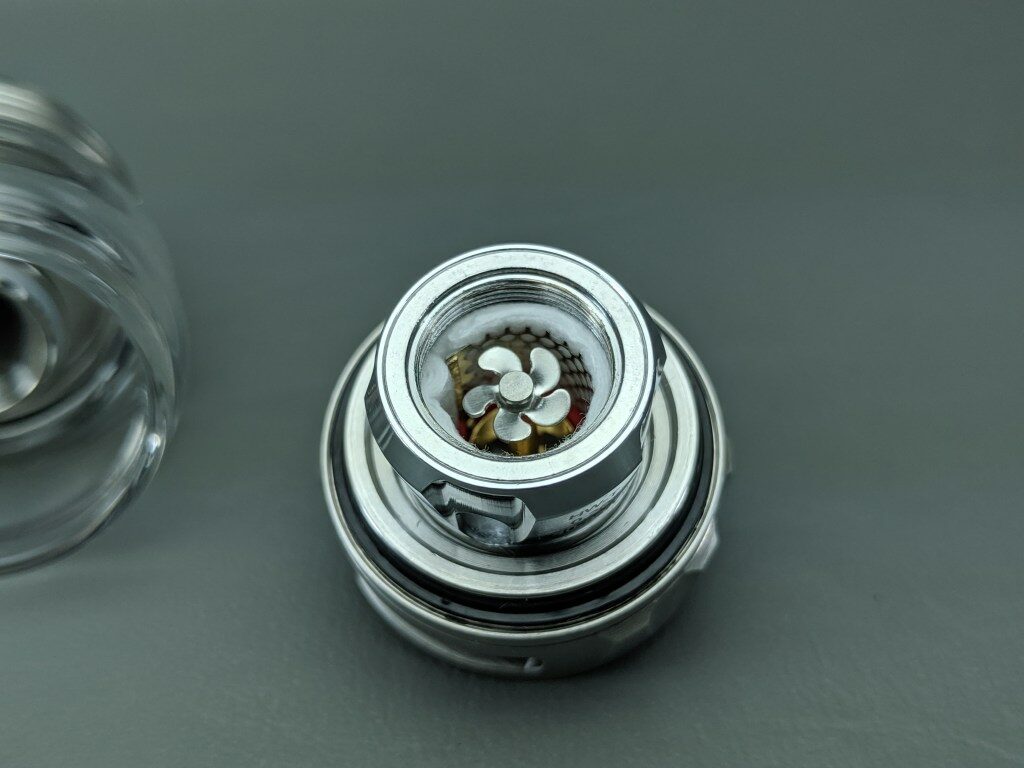 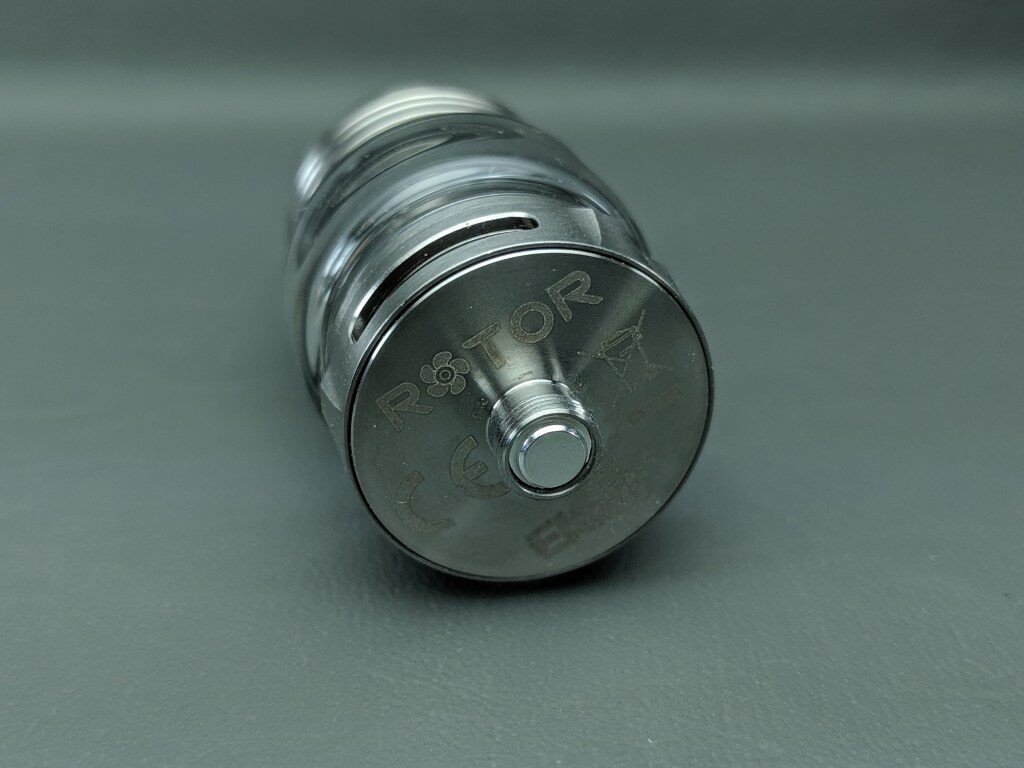 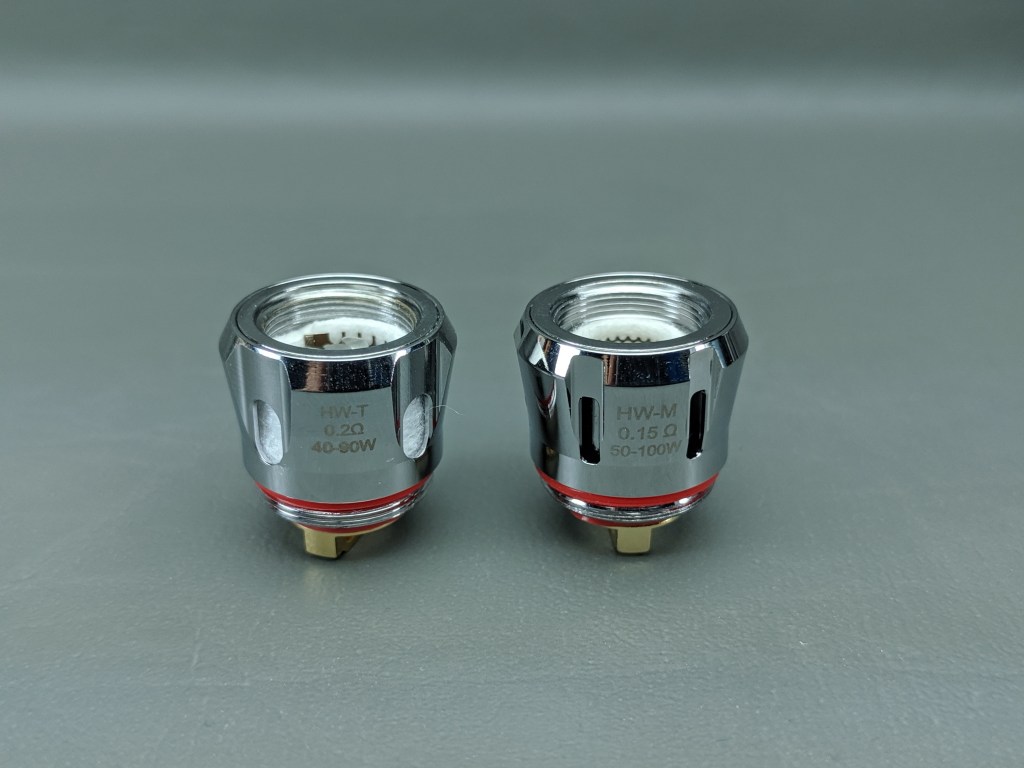 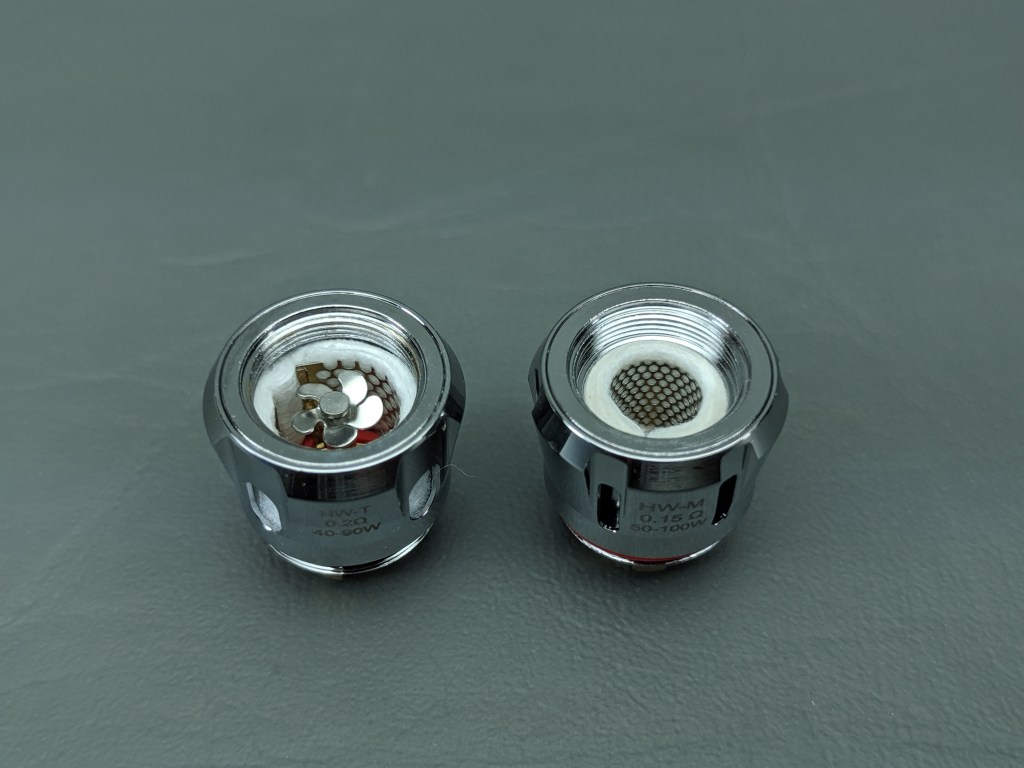 The new coil HW-T coil is extremely similar to the classic HW-M coils but with one major update, it’s got a propeller. Yup you read that right, inside the coil, right in the center standing proudly is a little metal propeller that looks like it came off the tiniest little boat. Now it’s not the first time we’ve seen atomizers with propellers in them with Tobeco probably being the first producing the Turbo RDA all the way back in 2015. It was a bit of a gimmick and aside from releasing a v2 and 3 the concept never really took off, at least not in regards to RDAs. This however is the first time we’ve seen a propeller actually in a coil.

So how does it affect performance? Well it doesn’t sound like one of these thankfully and when I first loaded up the tank and fired it up it felt like it was adding a slight vortex to the vape, you know when you’re emptying a bottle of water how you can spin it to get the contents swirling and it helps empty the bottle quicker, it kind of felt like that. Like the vapour was being pulled in quicker but without any additional effort. However after maybe the first day I couldn’t really feel the propeller spinning anymore. I’m not sure if juice gummed it up and stopped it from spinning or I could just no longer feel it moving but beyond the first day I really couldn’t even tell that there was a propeller in my coil.

Did I notice any difference with overall performance or more importantly flavour? No I can’t really say I did but the coils work just as well as the HW-M coils that I’ve already grown used to. They’re mesh based of course so produce some really dense thick vapour with fantastic flavour and from my experience with them they tend to last a long time and hardly ever leak a drop. So what does the propeller actually add to the vape, well not only does it add that slight turbine effect to the vape but it pretty much promises you won’t get any spit back. Any liquid bubbling up trying to make it’s way out the mouthpiece will be chopped down by the propeller and more than likely flung back against the inside of the coil. I know in my time testing it not once did I get anything even resembling spit back which is always a good thing.

So what do I think of the Rotor tank? The tank itself as I mentioned is nothing really new and is really just the culmination of years of development and refinement. The Rotor coil though works well but I’m leery as to how much the little propeller actually adds to the vape and as I only had the one propeller based coil to test it with I wan’t able to form much of an opinion on it’s benefits. Is it gimmicky? Maybe a bit. Does it add anything I can’t live without to my vape? Not really but the Rotor tank itself is solid and the fact that it will accept a wide variety of coils not to mention these new propeller based ones makes it a versatile little tank. This one will be mostly for the cloud chasers out there looking for big fluffy clouds but really anyone looking for a decent subtank will find it hard to go wrong with the Rotor.

+ Flavour and vapour from mesh coils

– Only one HW-T coil included in my kit