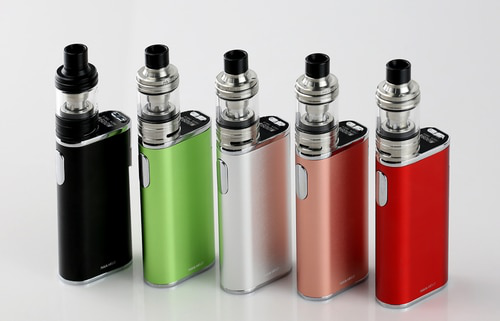 Electronic cigarettes or e-cigs are battery-powered handheld devices that simulate smoking, and some of its behaviors or habits like vaporizing. When the battery is ON, the device heats the e-liquid. It turns it into vapors that the user can inhale, simulating the sensation of smoking cigarettes.

Main Components of an E-cig:

The battery is the source of the power of an e-cigarette. Depending on the model, the capacity of the cells varies, and the power of the device also varies.

A tank, atomizer, or cartridge is the container that holds the e-liquid.

E-liquid acts as tobacco, it can contain nicotine or not, and it comes in all kinds of flavors.

E-Cigarettes Are Also Known As:

The Origin of E-Cigarettes

Joseph Robinson is the first person to come up with the idea of an e-cigarette in as early as 1927. Later in 1963, Herbert Gilbert made vaping popular with its smokeless non-tobacco cigarette. And in 2003, a Chinese pharmacist Hon Lik reprised the idea and invented what we today know as e-cigarettes.

How Does It work?

Vapors are created by filling the Atomizer, Tank, or Cartridge with e-liquid, also known as e-juice. The battery then heats the resistance that’s part of the atomizer, when you inhale the e-liquid through the mouthpiece, vapors come out.

A Cigalike is an e-cigarette designed to look and feel like a traditional cigarette. It’s small and lightweight, it means it has a low battery, so little autonomy. Because of the small cell, it can produce very little steam.

It’s also the oldest form of e-cigarettes, the term comes from the English “cig-a-like,” which can be translated as “looks like a cigarette.”

The Tube MOD is a device that has a cylindrical shape, it looks like a pen, but bigger. It incorporates a larger battery, it has a functional autonomy for your daily use.

Very efficient, it allows you to adjust the quality of the vape according to your needs. It uses an atomizer that can be refilled with e-liquid, allowing you a large variety of choices in terms of flavors.

The Box MOD is very similar to the Tube MOD in terms of usage and functions. The main difference, it adopts a square design for the battery and is most of the time bigger. Because of its bigger size, it has a more pleasant grip.

A POD is a small vaping device that uses a two-part system:

A pod or cartridge that can be filled with e-juice

A low battery will heat the POD, allowing the e-liquid to be inhaled.